On Saturday, two volunteer friends and I visited Mirusha Waterfalls.

Our trip was almost thwarted by the threat of rain. But by the end of the week, the forecast had cleared. I’m so glad we decided to go!

The hike to the waterfalls is a few kilometers. Along the way, we saw lots of beautiful wild flowers.

When we reached this stream, we knew we were getting closer … 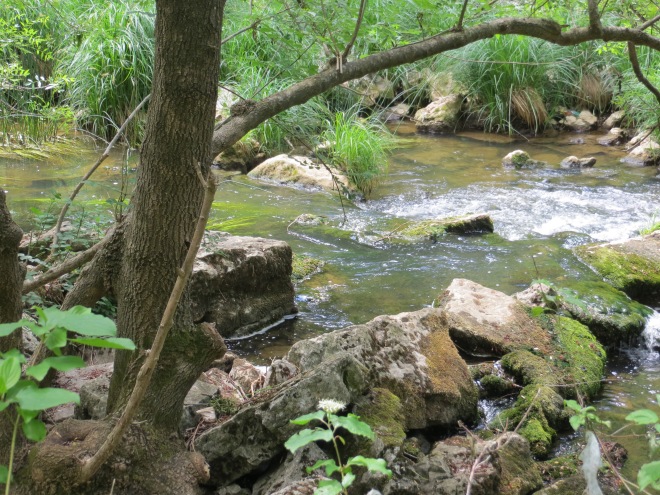 And here’s the first waterfall!

After that, we hiked up to a second waterfall. The path was steep and rocky, and at several points, we had to climb, using rocks to propel ourselves upward. The journey was totally worth it! We reached a second waterfall, and pretty much had the place to ourselves. It was the perfect spot to stop and eat our picnic lunch.

Visiting Mirusha Waterfalls was one of the most relaxing, enjoyable times I have had in Kosovo.

Hi, guys! My friend Ingrid has gone on some very cool hikes, and I asked if she would write about her experiences for this blog. Read on to learn about her recent hike in Valbonë, Albania. All of these beautiful pictures were taken by Ingrid. –April

Since I’m from a state known for its mountains, I’ve been longing to see and experience the mountains of Kosovo and beyond since I arrived. In my 4 months here, I’d yet to see much of the wild parts of Kosovo, so a trip to Valbonë National Park sounded great. Even though I live near Prizren, which is in the south of Kosovo and near the mountains or right up next to them, it’s often difficult for me to get to any hiking. As a Peace Corps volunteer we’re not allowed to drive, and shuttles or local hiking buddies can be difficult to find. This trip was a charter trip with a tourist company called Eurotrip to Northern Albania … and while that’s not technically Kosovo, it’s just two hours northwest and over the border in a country that shares a common language and heritage with Kosovo. In fact, Kosovars are so linked to Albania that most of the time they use the Albanian flag at celebrations and not the Kosovar flag.

Leaving from Prizren early in the morning we headed northwest towards the market town of Gjakovë. Just after the city, as we traveled directly west over the border. You could see the craggy peaks of the Albanian Alps in the distance. They looked imposing. Another name for them is the Accursed Mountains. This part of Albania is known for it’s rugged isolation, both of the environment and its native people, and until recently, few outsiders ventured there. Now it’s one of the gateways to the Peaks of the Balkans trail, where you can hire a guide traverse these pristine mountains through the countries of Kosovo, Albania and Montenegro.

As we wound our way up the narrow valley road that hugged the river between towering peaks, I gained abundant respect for the driver as he negotiated hairpin turns and one-lane bridges. Along the way fall colors erupted from trees sprinkled among the evergreens. We slowed often for cows and herds of shaggy longhaired goats. Most perplexing to me was the goatherder sporting a full suit but with a hobo bag on his back. Small villages dotted the landscape in the lower valley, hay stacked in formations that looked like giant beehives.

Our bus dropped us off literally at the end of the road into the park at Hotel Burimi I Valbones, a lovely and large hotel with a restaurant and most importantly, a bathroom! Which, of course, they graciously allowed all 60 or so of us to use. From the hotel the trail strikes out across a deep, wide glaciated valley. This part of the trail is along a very rocky blindingly white stony glacial moraine and goes for about 3 miles. Sturdy shoes with good soles are recommended. Even though it was October, the exposure and the rocky trail gave me a good feeling for what it would be like in the height of summer. It was hot. A backpacker couple told me later that the mountains don’t have much water and are extremely hot and dry in the summer. Even in October, they still carried water for overnight backpacking.

Along the valley are some abandoned old stone houses that looked interesting to explore. Towering peaks on both sides and ahead reminded me of the stony craggy peaks of California’s Sierra Nevada range. About 3 miles in we came upon a fully functional restaurant, bar and guesthouse. They served traditional Albanian food, salad, buke (bread), fried peppers, cheese and meats. This was at the end of the 4-wheel drive tourist road that some took instead of walking. The sweeping view from this restaurant allowed you to see for miles down the valley. Directly in front of the restaurant, across the valley, the mountain rose up like a great wall several thousand feet up. The granite tops looked white, and at first I thought it must be snow, but then I realized the rocks on top were streaked white.

After this restaurant the trail narrowed and was not accessible by vehicle. About a mile after there was another small café and as I passed by a woman was in the process of making flia, a very traditional Albanian dish that consists of multiple crepe-like layers brushed with cream, oil and flour. It looked like it would be ready on my way back. She smiled as I asked if I could take her picture.

After that, I followed the trail steadily upward through forest and deeper into the canyon. In a couple miles we began to climb steeply and then for the last 30 minutes we clambered over tree roots and stones to our final destination, a waterfall.

As we savored the cool spray, some ate and splashed in the water. One devout hiker laid out his prayer rug on a flat rock at the bottom of the falls and pointed downvalley – apparently the same direction as Mecca – and with a view that went for miles, began to pray.